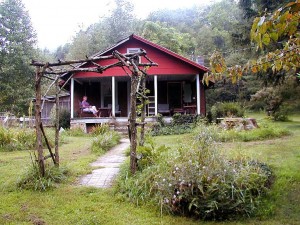 The original part of the house was built in the depression on land that once belonged to my great grand-parents, John Patrick Autrey and Harriet Gibbs Autrey. It was built for my aunt and uncle, Mary and Roy Autrey.

The cabin was built by Uncle Roy’s three brothers, one of which was my dad, Gene Autrey. In the early 1930’s, they couldn’t get round nails because of the depression. They had to use square-cut nails instead that the blacksmiths made. The lumber was sawed at a local sawmill from trees grown locally, mostly poplar, chestnut and some hemlock.

I used the cabin as a rental house until 1994 at which time Ron and I decided to use it ourselves and initiated repairs to update the windows, electrical wiring and plumbing. Repairs were completed in 1999. We lived in the home until 2002 when our new home was completed.

When my great-grandparents lived on the river, they had a canoe. When people came to see them, they would yell from the other side of the river and my great-grandmother would ferry them across in their canoe. I believe the term they used was “setting them across the river”.

The cabin has served a lot of people well over the years and we hope that you might enjoy it as we still do.

Request reservations or ask questions with our online request form.
We also invite you to call us 828-675-5159 or email us for further information.